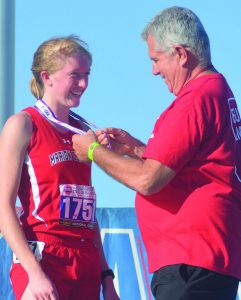 Delaney Straus receives her medal after her third-place finish at the Class 1 state cross country meet. (Photo by Will Johnson, Gasconade Republican)

The Lady Mustangs finished in eighth place, one point behind Smithton and 44 points behind last year’s state champions from Blue Eye in a 16 team field.

Delaney Straus led the Lady Mustangs with her third straight, third-place finish with a time of 20:14. Riley Arnold was the state champion for the third year in a row.

“We were really proud of our girls”, said Coach Dale Gosney. “The girls didn’t run their best times by any means at the state meet but they ran hard and competed.”