Dyoni Mundy made PHS sports history by becoming the school’s first female wrestler to advance to the state tournament. 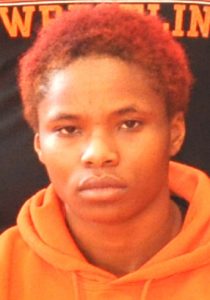 Mundy, a junior, took second place in the 122-pound weight class at Saturday’s sectional tournament in Versailles and will now compete at state Tuesday, March 9, at Cable Dahmer Arena in Independence.

“She wrestled a great tournament in a pretty tough sectional tournament,” said Coach Josh Buatte. “Now she’ll have a little break between now and state to work on a few things to prepare for the state tournament.

“Then she will just need to leave it all on the mat when she wrestles.”

Mundy, who is now 26-3 on the season, won her first two matches Saturday before falling in the title match by fall at 2:50 to Marissa Sanabria of Holt.

Mundy opened the tournament with a quarterfinal victory by fall at 2:49 over Vanessa Guevara of Jefferson City, and then won her semifinal match by fall at 1:02 over Abbigale Drew of Mexico.

“Dyoni is a very hard worker and has worked for this all year,” Buatte said.

Palmyra’s other sectional qualifying female wrestler, Anna Ragar, lost both of her matches in the 117-pound weight class.