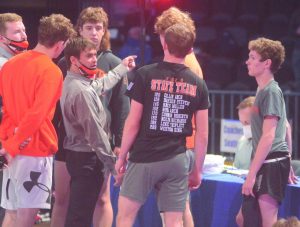 Panther wrestling coach, Josh Buatte talks to his wrestlers prior to the state competition in Independence. (Photo by Will Johnson, Gasconade Republican)

As a team, the Panthers had their best finish, taking sixth out of 45 teams.

Arch only had to wrestle three times to continue his undefeated string in high school.

After receiving a first-round bye, the junior, competing in the 132-pound weight class, won his quarterfinal match by technical fall, 19-3, over Colton Parn of Brookfield.

He then won his semifinal match by fall at 0:38 over Brendan Barton of Maysville, and then won the title with a major decision, 11-2, over Gavynn Carpenter of Hallsville.

Crane, a senior, also received a first-round bye in the 106-pound weight class and won his quarterfinal match by a 9-3 decision over Levi Wilhem, of Knob Noster, before losing in the semifinals by fall at 1:37 to Lucas Barry of St. Michael the Archangel.

He managed to bounce back and win the third-place match by fall at 0:32 over Ryder Coons of Mid-Buchanan.

Stevens, a junior, earned a first-round by in the 126-pound weight class and won his quarterfinal match by 30-7 major decision over Kaden Andersonof Mid-Buchanan before losing in the semifinals by technical fall, 17-2, to the eventual champion, Lucas Laux of Fatima.

He then lost the third-place match, by a 6-3 decision, to Andrew Stanfield of St. Michael the Archangel.

Competing in the 220-pound weight class, Triplett, a junior, won his first-round match by fall at 5:09 over Mason Hibdon of Versailes, but then lost his quarterfinal match by fall at 3:22 to the eventual champion, Jonah Frank of Carrollton.

Triplett won his second-round wrestleback match by fall at 0:28 over Larry Penniston, of Richmond, and his fifth-place match by a 2-1 decision over Sam Lynn of Centralia.

Two other Panther wrestlers, Hayes Miller and Nolyn Richards, lost out at the state tournament.

Competing in the 160-pound weight class, Miller, a sophomore, lost his first-round match by a 7-2 decision to Aiden Ivison of Richmond, and lost his second-round wrestleback match by fall at 2:25 to Eli Henry of North Callaway.